70 years of the Institute of Slovenian Literature and Literary Studies

In July 2018, seventy years have passed since the Institute for Literatures was founded, on 24 July 1948, by the Slovenian Academy of Sciences and Arts (SASA) – the founder of several research institutes (such as the Jožef Stefan Institute and the Chemistry Institute) after the Second World War – on the proposal made by its Secretary General, Fran Ramovš, a year earlier, on 12 July 1947. The Institute’s first manager was Academician France Kidrič who was the founder of university literary history and comparative studies in Slovenia. In accordance with the Statute adopted at the SASA General Assembly on 20 December 1947, the Institute assumed the following tasks:

‘a) a critical and comprehensive investigation of the various problems of literary studies and literary history based on modern scholarly methods, both in domestic and foreign literary-historical and literary-theoretical production;

b) the publication of scholarly monographs and standard works from the above-mentioned fields and following the outlined orientation;

c) the revision of Slovenian scholarly endeavours in literary history from the perspective of modern scholarly methods;

d) critical and annotated editions of Slovenian classics and of the written correspondence between renowned Slovenians;

f) mentoring works by scholarly aspirants and candidates for the Master Degree and Doctor of Philosophy titles;

g) scholarly networking with university literary historians, literary-historical associations and cultural societies, special lectures tailored to the needs of university students, and so on.’

In the seventy years of its existence, the following individuals have held posts as managers and heads of the Institute: France Kidrič, Josip Vidmar, Anton Ocvirk, Janko Kos, Darko Dolinar and Marko Juvan. A few generations of employees and associates have taken turn to date, among whom, especially in the early period, many prominent intellectuals: Dušan Pirjevec, Alfonz Gspan, Drago Šega, Primož Kozak, France Bernik and Fran Petrè. In recent years, the number of employees has increased: from the establishment of the Institute to its fiftieth anniversary in 1998, some thirty people were employed; since then, partly in conjunction with the establishment of the independent Biographical Section, as many as eighteen professionals have held a position at the Institute. At present, the Institute employs ten researchers and one administrative assistant.

Since its inception in 1948, the name of the Institute and its organisation structure have changed: in the early 1980s, it became a part of the Research Centre of the Slovenian Academy of Sciences and Arts and was renamed as the Institute of Slovenian Literature and Literary Studies. In 1998, the Institute’s Slovenian Biographical Section became an independent institute. In the meantime, the ecosystem of research undertakings was thoroughly transformed, that is, the socio-political and economic circumstances and the ways in which academic enterprise is financed. Since its establishment in the previous socio-political system to this day, the Institute has successfully overcome the difficulties of continuous underfunding, while in the new system the risks of financial malnutrition have been joined by those of unpredictability. As is generally the case with public research institutes, the Institute of Slovenian Literature and Literary Studies has sustained its activities for more than two decades depending on the ‘lottery’ of project and programme funding, which makes long-term research more difficult, compromising the integrity of the research group and fragmenting the careers of its researchers.

In the seven decades, literary studies itself has experienced paradigm shifts in methodology, subject areas and the technologies of research work: from positivism and immanent interpretation through structural-semiotic analysis, hermeneutics and receptive aesthetics to poststructuralist deconstruction, renewed forms of historicism and digital humanities. Slovenian literary historians, comparativists and literary theorists at the Institute have reflected on these changes and co-created them at the same time, focusing in particular on less studied areas; in recent times, for example, on the literatures of Latin and German origins from the early modern age in the Slovenian territories; on the works of exceptional cosmopolitan polymaths; on the manuscript circulation of religious and secular texts during the period of the dominance of the print form; on the history of censorship; on the international context of the Slovenian national movement and the role of literature in it; on the theories of discourse, intertextuality, narrative and genres; and on the position of Slovenian literature in the world literary system and the spatial history of Slovenian literary culture.

Despite the described changes, the profession itself and the circumstances of its scholarly endeavours, as well as the principal tasks of the Institute remain surprisingly similar to those set at the Institute’s inception (with the exception of some tasks related to the Slovenian Biographical Lexicon). Below is the recent profile of the Institute as published on its website:

‘In addition to the University, the Institute of Slovenian Literature and Literary Studies is the only Slovenian research institution that engages in the systematic and interdisciplinary research of literature. Its focal points are Slovenian literature and literary studies, cultural history, comparative literature, literary theory and digital humanities. The members of the Institute lecture and publish on various literary periods, literary genres and spaces, as well as on the state of literary studies. They regularly participate in national and international projects dedicated to these topics. In the forefront of the Institute’s team efforts are long-term group research and studies of the most current problems of the research area.

The Institute has nourished cooperation with SASA and other Slovenian and foreign research and educational institutions. Its members regularly host international conferences and lecture at the ZRC SAZU Postgraduate School and at the University of Ljubljana. They have held research and teaching positions at universities throughout Slovenia and abroad. They have also actively served in professional associations, such as the Academia Europaea, ICLA/AILC and REELC/ENCLS (now ESCL/SELC), SD18 and SDPK.

In the most recent period, special attention has been given to interdisciplinarity and digital humanities, with a marked strengthening of the international role of the Institute as one of the regional centres of high-quality, thorough and innovative literary studies. This is further corroborated by quantitative data, with which we are so fond of measuring success today. For the period 1998–2018, the Sicris Slovenian Bibliographical System evidenced over 2,800 bibliographical units, of which 232 original scientific articles, 237 independent chapters in scientific monographs, 47 scientific monographs, and nearly a thousand lectures and papers presented at conferences and various foreign universities. In the last decade or so, the Institute has organised or co-organised eighteen scientific conferences. Dozens of works have been published as part of the Institute’s numerous book collections: in the Studia litteraria collection, which replaced the former representative collection of the Literary Lexicon, 24 volumes have been published since 2004; in the Collected Works of Slovenian Poets and Writers series, which came under the aegis of the Institute in 2010, 43 volumes have seen the light of day. The Institute has also become an important centre for electronic editions of scholarly criticism, scientific monographs and repositories, such as the Digital Critical Editions of Slovenian Literature (eZISS), Digital Scientific Monographs (eZMono), The Unknown Manuscripts of Slovenian Literature (NRSS), The Space of Slovenian Literary Culture (PSLK) and National Poets and Cultural Saints of Europe.

At the time of its seventieth anniversary, the Institute of Slovenian Literature and Literary Studies of the Research Centre of SASA is clearly going strong. Even more, its members are obviously so busy with their research that we almost forgot about the need for a public celebration of the Institute’s seventieth anniversary. The old and new members of the team nonetheless gathered - albeit in the narrow, intimate circle - to toast the Institute and celebrate its rich history. The public ceremonies will have to wait until the seventy-fifth anniversary!

Marko Juvan, Head of the Institute 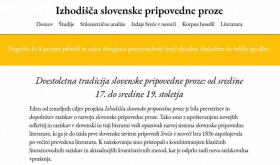